Cooling and how air conditioners work

Cooling is the transfer of heat energy via radiation, conduction or convection. But how does cooling really work in facilities management systems.

Facilities management cooling systems take advantage of a very clever physical law. When a liquid converts to a gas, it absorbs heat and conversely, when a gas converts to liquid, it releases heat.

Facilities management systems use these principles over and over again to move heat from one location to another (e.g. from indoors to outdoors). In very simple terms, they use a closed loop of pipes to circulate a compound. Within this system is a compressor to convert the compound to a gas (therefore absorbing heat) and an expansion valve to convert it back to liquid (releasing heat). It’s a little more complicated than that, but if you keep that simple concept in mind when reading the rest of this article.

Before we move on, just to let you know the compounds cooling systems use are known as refrigerants which have special qualities that allow them to change from liquid to gas (and vice versa) at much lower temperatures, thus better facilitating the cooling process. So here goes in a bit more detail:

1. When hot internal air flows over the cold, low-pressure internal evaporator coil (more commonly known as the internal air handling unit), the refrigerant inside absorbs heat and as it does so, it changes from a liquid to a gas.

2. To keep cooling efficiently, the air conditioner has to convert the refrigerant gas back to a liquid again. To do that, a compressor puts the gas under high pressure, a process that creates unwanted heat.

3. All the extra heat created by compressing the gas is then evacuated to the outdoors with the help of a second set of coils called condenser coils, and a second fan. As the gas cools, it changes back to a liquid.

4. The liquid refrigerant runs through an expansion valve, and in the process it evaporates to become a very cold, low-pressure gas. This is feed back into air handling unit and the process starts all over again.

It’s easy to see that there are two distinct things going on in an air conditioner. Refrigerant is chilling the indoor air, and the resulting gas is being continually compressed and cooled for conversion back to a liquid again.

Now lets look at the various components of  a cooling air conditioner in more detail:

The internal evaporator coil is a series of piping connected to a furnace or air handler that blows indoor air across it, causing the coil to absorb heat from the air. The cooled air is then delivered to the house through ducting. The refrigerant then flows back to the compressor where the cycle starts over again.

The internal ‘Air handling Unit’ of an air conditioner contains the evaporator and a fan that blows air over the chilled coils and into the room. The external part of the facilities management unit contains the compressor, condenser and another fan to vent hot air coming off the compressed refrigerant to the outdoors.

In between the two sets of coils, there’s an expansion valve. It regulates the amount of compressed liquid refrigerant moving into the evaporator. Once in the evaporator, the refrigerant experiences a pressure drop, expands and changes back into a gas. The compressor is actually a large electric pump that pressurizes the refrigerant gas as part of the process of turning it back into a liquid. There are some additional sensors, timers and valves, but the evaporator, compressor, condenser and expansion valve are the main components of an air conditioner.

Described above is a conventional setup for an air conditioner and it is known as a ‘split’ system.

Please Share This
Related Posts
What are heat pumps? 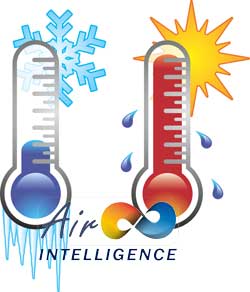